Home » Our Blog » Having a Hard Time Kicking the Habit? Here are more Reasons to Quit Smoking!

Having a Hard Time Kicking the Habit? Here are more Reasons to Quit Smoking! 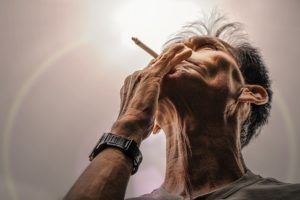 Habits. Some, we are encouraged to keep, like going to bed early and exercising several times a week. We are told that other habits, such as smoking, could lead to health consequences that we’d rather not endure. Still, millions of people struggle to rid themselves of the urge to use some form of tobacco. We understand the power of a strong habit, and we offer support to our patients in the form of information and personalized dental care. Here, we want to touch on the ways in which smoking and smokeless tobacco products could harm your mouth.

The primary cosmetic concern that smokers face is discoloration. At least for awhile. If oral health declines significantly enough, there are far worse complications to face than teeth become yellow and stained. Initially, and maybe for some time, what can be done to alleviate concerns that smoking will dull the smile is to have teeth professionally whitened. However, there may come a point when this approach is more risky than helpful. The chemicals in tobacco products break down enamel, making discoloration a greater possibility as a perpetual state. If enamel becomes too weak, any type of whitening may be uncomfortable.

The other “C” Word

Cosmetic issues are of primary concern to many people who smoke. However, there is also the other “C” word that must be acknowledged. Rates of oral cancer are substantially higher in individuals who smoke, or who smoked at some point in their lives. It could be the lack of adequate oxygenation to oral mucosa that instigates the development of cancer cells in the mouth. It may also be the direct exposure to more than 70 carcinogenic chemicals that are in cigarette smoke. Maybe it’s a combination of these two factors. Either way, oral cancer is a tricky condition to detect, and one that we would rather help you avoid.

Tobacco breaks down the gums in two ways. It does so by inhibiting adequate oxygenation from the inside of the mouth, and also via the blood. Secondly, the irritating chemicals in tobacco products causes chronic inflammation and an acidic environment in which naturally occurring bacteria thrive. In combination, these factors are too much for the gums to withstand. Tooth loss is a common side effect of gum disease in the smoker.

We enjoy offering friendly care to our New Orleans patients! Schedule a visit with our experienced dental team at 504-486-3339.